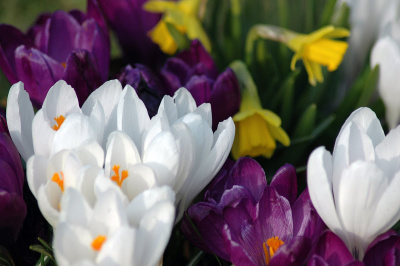 “March is a month of considerable frustration – it is so near spring and yet across a great deal of the country the weather is still so violent and changeable that outdoor activity in our yards seems light years away.”
– Thalassa Cruso

The name of March comes from ancient Rome, when March was the first month of the year and named Martius after Mars or Ares, the Greek god of war. In Rome, where the climate is Mediterranean, March was the first month of spring, a logical point for the beginning of the year as well as the start of the military campaign season. January became the first month of the calendar year either under King Numa Pompilius (c. 713 BC) or under the Decemvirs about 450 BC (Roman writers differ). The numbered year began on March 1 in Russia until the end of the 15th century. Great Britain and its colonies continued to use March 25 until 1752, which was when they ultimately adopted the Gregorian calendar. Many other cultures and religions still celebrate the beginning of the New Year in March.

The name Ostara goes back to Jacob Grimm, who, in his Deutsche Mythologie, speculated about an ancient German goddess Ostara, after whom the Easter festival (German: Ostern) could have been named. Grimm’s main source is De temporum ratione by the Venerable Bede. Bede had put forward the thesis that the Anglo-Saxon name for the month of April, Eostur-monath, was named after a goddess Eostre. Ostara is one of the four lesser Wiccan holidays or sabbats of the Wheel of the Year. Ostara is celebrated on the spring equinox, in the Northern hemisphere around March 21 and in the Southern hemisphere around September 23, depending upon the specific timing of the equinox.

Among the Wiccan sabbats, it is preceded by Imbolc and followed by Beltane. In the book Eight Sabbats for Witches by Janet and Stewart Farrar, the festival Ostara is characterized by the rejoining of the Mothe Goddess and her lover-consort-son, who spent the winter months in death. Other variations include the young God regaining strength in his youth after being born at Yule, and the Goddess returning to her Maiden aspect. Ostara is the virgin Goddess of spring. This holiday concerns the deity’s trip to the underworld, and their struggle to return from the Land of the Dead to Earth. When they accomplish this return, they have a life renewed. It was considered bad luck to wear anything new before Ostara, so the people would work through the winter in secret to make elegant clothes for the Sabbat celebration.

The entire community would gather for games, feasting, and religious rituals while showing off their clothing. The modern belief that eggs are delivered by a rabbit known as the Easter Bunny comes from the legend of the Goddess Eostre. So much did a lowly rabbit want to please the Goddess that he laid the sacred eggs in her honor, gaily decorated them, and humbly presented them to her. So pleased was she that she wished all humankind to share in her joy. In honor of her wishes, the rabbit went through the entire world and distributed these little decorated gifts of life”
– Ostara in Wikipedia

The birth flower for March is daffodil. In the language of flowers, daffodils symbolize chivalry, respect, modesty and faithfulness.

Aries, the ram, is the first astrological sign in the Zodiac, originating from the constellation of Aries. In western astrology, this sign is no longer aligned with the constellation as a result of the precession of the equinoxes.

I invite you to check out my websites!

The Desert Path: The dusty ramblings of a desert pagan. https://thedesertpath.com/

1 thought on “Welcome to March!”