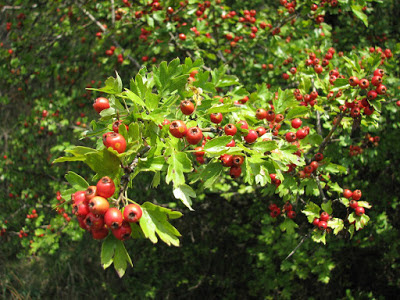 The Celtic Tree Month of Hawthorn,  May 13th to June 9th.

The origin of the word Hawthorn comes from the Anglo-Saxon “Haegthorn” which means hedge thorn. This tree grows to the size of a large shrub, it is because of this that it is popular as a hedge plant in England. It has dense branches that grow in twists and turns which makes it almost impenetrable. It also grows some pretty nasty thorns. The wood is similar to apple and burns hot. The new growth on a hawthorn is reddish and in May it sports white flowers and later in the season red berries both of which have medicinal properties. This tree has a very long life span and has been known to reach 250 yr old. The hawthorn was often called the May Tree because its fragrant white flowers bloomed in May just in time for Beltane. These flowers were used for decorating maypoles and homes for the holiday. (this custom must have come later because as you will see this tree is a good guy/bad guy tree). The flowers were also used for weddings by the Greeks and Romans who considered them lucky. On the other end of the scale, the Europeans said the hawthorn was unlucky and associated with witches. As I said good tree/ bad tree ( pretty flowers but nasty thorns) and the Irish Brehon word for this tree means “harm”.

In healing, the flowers, leaves, and berries are used. A tonic made from the berries is said to help water retention in diabetics. The leaves and flowers can be made into a tea that helps anxiety, poor circulation, asthma, arthritis, loss of voice, and rheumatism.
In Myth & Magic

In ancient times hawthorn had a double reputation. The Greeks and Romans considered them lucky while the Europeans said the hawthorn was unlucky and associated with witches. In time the flowers were used for decorating maypoles and homes for the Beltane. One interesting superstition is that the month of May is considered to be unlucky for weddings and is said to be the main reason that June weddings are so popular.

As a protective plant hawthorn was used to protect the home from lightning and negative entities and the ancient Romans believed that children were protected from evil spells if it was placed in their cradle. it could grant wishes and could be found guarding sacred wells and crossroads.

Hawthorn has long been considered a witches tree and is part of the sacred triad of oak, ash, and thorn (the three realms/ maiden, mother, crone). It is also a favorite of fairies which makes it very unlucky to cut one down or harm it in any way.

To dream of pink hawthorn flowers means happiness, but if they are white it means money. If you dream of the tree itself it means harmony among friends. As a magical name, Hawthorn is perfect for witches of either sex.
Hawthorn People

Hawthorn people are full of great ideas and tend to be multi-talented innovators. These people may also be performers in an artistic format, much like the Bards of old. They also make shrewd business people and have little patience with folks who do not take their work seriously. They can also be very protective of family and anyone they consider family.

Compiled and written by Cat from the following sources:

I invite you to check out my websites!

The Desert Path: The dusty ramblings of a desert pagan. https://thedesertpath.com/